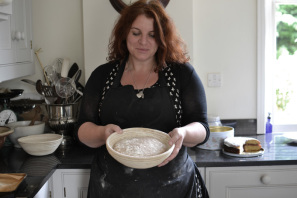 Basic Ingredients: Baker Vanessa Kimbell is a BBC radio broadcaster and author who specialises in baking with wild yeast. Those keen to learn about the pedigree of super trendy sourdough could simply refer to her website, a fascinating and insightful ode to the current king of breads and a runner-up in Looking to Cook’s Best Website award. However, this would mean missing out on a range of expert classes, held in Vanessa’s Victorian home in Pitsford, Northamptonshire. People travel from all over the world to take her informative, hands-on and fully immersive six-hour courses. They include Sourdough for Beginners, Learn to Make Sourdough Pizza and Set up a Home Bakery do exactly what they say on the loaf-tin. Completion of a class grants lifelong membership to The Sourdough Club, which supports continued learning through sharing tips, techniques, video tutorials and an annual Bread Exchange. Regular Sourdough Bread Clinics are run by guest tutors including baking supremo Dan Lepard and Vivien Lloyd, an expert on traditional preserves.

They say: I set up the Sourdough club because  I hated going on courses, feeling motivated for a few weeks and then finding my initial enthusiasm slip, so the idea behind the club is to stay in touch with students, set new challenges and encourage everyone to keep up their baking. It also means that students interact with other bakers and keep learning.

We say: Vanessa describes herself as a “food activist” and applies this fervour to her passion for sourdough; something that began when she searched for solutions to the increasingly common problem of wheat and gluten intolerance. Her journey took her as far back as 1770, long before the chemically-enhanced industrialisation of breadmaking, to a recipe for sourdough leavened with Beer Barm. An attempt to replicate this led her to a miller, with a lifelong passion for ancient grains, called John Letts, who donated some of his heritage blend; flours first introduced by the Normans in the 11th century. What Vanessa found was that this produced bread of a superior flavour; a sourdough not only easy to digest but beneficial to health in general. Vanessa helped John to create Lammas Fayre, a range of flours “from almost every key period in history”, which is available to buy at BakeryBits.co.uk . So now anyone “can eat the kind of bread that Queen Elizabeth I ate as she listened to news of the defeat to the Spanish Armada.”

Basic Ingredients: The professional and fully equipped kitchens at the Coghlans...

Basic ingredients: With its country estate setting and impressive roster of former...

Described as the cornerstone of Newcastle’s historic past,...

With more than 25 years of culinary globe-trotting, from America...