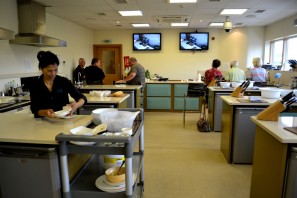 The kitchen at Eckington Manor

A friend once told me that I should consider a cookery school a success if I learned one new thing. His advice, delivered after a particularly poor example of the genre where we had, indeed, learned only one new thing, popped into my head as I joined six other eager students in the immaculate and well-equipped cookery studio at Eckington Manor Cookery School.  As it happened, guest chef Felice Tocchini taught us a great deal more than “one new thing” in a day-long class on Italian cuisine that combined just the right amount of hands-on cooking, demonstrating and tasting.  It was friendly, relaxed and fun as well.

The seven of us, a mixture of keen amateur cooks and clueless holiday-makers spread out among the cooking stations. There are ten in all – five with Falcon ranges that have five burner induction hobs, fan-assisted and conventional ovens and grills, and five with electric Agas.  The Agas were for another day and we all set to work on the Falcons.

Each cooking station also has its own refrigerator, filled with all the ingredients needed for the day’s cooking; two drawers full of top-quality pots, pans, utensils and gadgets; a knife block and a stainless steel sink.  The used “tools of our trade” disappeared discreetly, only to reappear washed, dried and ready to use just when we needed them.

During the course of the day, Tocchini led us in preparing soufflé-like cheese cakes, cockles and mussels with fennel and wine and a risotto with lemon marinated chicken and crème fraiche. As we gathered around his work surface or watched on two flat-screen televisions he demonstrated a fresh tomato sauce, a Tuscan soup with bread and tomatoes, gnocchi made of bread with two sauces, and pasta making. There was plenty of tasting along with wine and coffee on demand throughout the day. In fact, if we had any complaints at all it was only that by the time the last dish was ready for tasting, most of us were full to bursting.

And did we learn anything new? Well beside the recipes I prepared myself – sent in a recipe pack to all by email the next day – I learned:

– that leeks, onions and vegetables added to a warm pan will soften without oil as long as they’re covered

– the difference between infusing and cooking with herbs. Fresh strawberries infused with vanilla, cinnamon, cardamom and kirsch were a revelation

– rice doesn’t need to be washed; that instruction is a holdover from the days when rice was sold out of sacks that sat exposed on the street and has nothing to do with its starch content

– how to wrap a tortellini

– that herbs and vegetables chopped too fine lose all their flavour, and a great deal more.

The chef’s relaxed philosophy, expressed to one of the student cooks who asked about what herb and how much to add to a dish, was: “You add, you taste, you try. When it smells good, then it’s gonna taste good.”

Italian cookery is just one of a wide range of courses offered at Eckington Manor. Taught by the school’s own chefs as well as guest tutors, they range from half-hour classes in knife skills to three day courses on learning to live with your Aga.

Most of the ingredients used in the courses are grown on the Manor’s own farm or sourced nearby in the Vale of Evesham.

Cookery students can come for the day or stay on a bed and breakfast or dinner, bed and breakfast basis. Rooms are arranged in several historic buildings on the Eckington Manor Farm, some of which date from the 13th century.

We stayed in the recently refurbished “Milking Parlour” . Wood floors,  sitting areas with wood-burning stoves and panelled walls, walk-in showers floored with slate and lined with porcelain planks from Fired Earth and flat screen televisions combined to pull off a kind of  legerdemain that made our rooms rustic, luxurious and sophisticated all at the same time.

There are several good walks along the River Avon and around Eckington’s more than 270-acre farm. The village streets of Eckington, adjoining the farm, are lined with what must be among the best concentrations of thatched, half-timbered cottages in Britain.

All in all, an excellent experience and we’ll be returning soon.