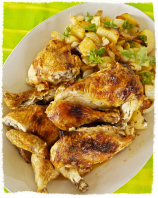 Voted runner up for ‘best city cookery school‘ in our very own 2012 awards, the exemplary Cookery School, tucked away down Little Portland Street in London, were the hosts for this evening’s master class. The creative force and guest tutor was Mexican chef Angeles Ayala and her culinary inspiration, a Mexican smoked chilli paste. What was to prove a collaboration of expertise to celebrate rich, rustic flavours, to me felt like a warm embrace as I stepped in from the bitter cold.

The Gran Luchito paste uses five rare Oaxacan chillies of the sort that have been cultivated in Mexico for 5,000 years. They are perfectly ripe at three months old, when they are smoked over an oak fire in handmade clay ovens.

The paste’s symbol is the Luchador’s Mexican wrestling mask which illustrates the close relationship the importer Fergus Chamberlain has with the chilli farmers who adore the national sport. The chillies are bought directly from these farmers and the smoking process ensures the flavour is preserved, from the mixes (Mexican hills) to mealtimes.

Fergus was busily slicing, dicing, and portioning ingredients for the class. Perhaps anticipating accusations of attempting to diminish our hands-on participation, he explained that what followed would be more about “playing around with flavour” than food preparation. Actually, what did follow was satisfyingly hands-on and an explosion of flavour across the nine recipes, all of which had been devised by Angeles.

Born, raised and trained in Mexico City, Angeles went on to develop her expertise at the Culinary Institute of America in New York and at Leith’s School of Food and Wine in London, where she has lived for just a decade.

Before the evening was out, she had to rush off to begin dinner service for the Mexican ambassador but thankfully there were no quips of “Ándele! Ándele! Arriba!” accompanying her departure.  Angeles set the authoritative tone with a brief education on Mexican cuisine and later garnered fearful respect when admonishing my companion for “not reading the recipe”. Subsequently, I learned there were others in the class that had felt the Scoville-scale singe of her mercurial manner.

Despite this, no one seemed to mind. We certainly weren’t going to argue with Angeles and her unwavering passion for her native cuisine, which she described as “one of the first fusion foods, given a Moorish-cum-Mediterranean twist with the arrival of the Spanish.”

Angeles also outlined the principles behind classic Mexican sauces such as salsa, adobo and mole. The latter she described as a thick, “complex” sauce, which often contains nutrient dense ingredients such as seeds and nuts. This seemed the likely inspiration for, perhaps, the most astonishing dish of the evening, Gran Luchito-infused walnut soup.

Other dishes included a Chicken Tomatillo, Camembert Bruschettas, Meatballs with Tomato, Potatoes Gratin and Tiger Prawns with Gran Luchito Marmalade. Each recipe called for approximately 2-3 tablespoons of the paste, and were to serve around four people as mains.

To begin, the group was divided into teams of three, each tackling three dishes, with my amigos and I taking on the aforementioned walnut soup, a Crudites with Feta and Gran Luchito dip, and Gran Luchito Picadillo, a traditional Latin American dish of ground beef and tomatoes.

Inter-team tasks were shared in a thoroughly egalitarian fashion – we all took turns to man (or woman) the stove – and onion-slicing responsibility was divided, ensuring tears were avoided, even during the verbal scalding received by my companion. Finally, with a collective sigh of satisfaction, we had prepared, cooked and served our tasty triumvirate within the allotted period leaving time to whip-up a ‘team guacamole’ for the competitive element of the evening.

When Angeles announced our guacamole as the winning dip, on the grounds of being the tastiest, I was so chuffed a desire to celebrate suddenly overwhelmed me. This I fulfilled with repeat visits to the various serving platters, overflowing with our edible bounty. Eventually pausing for breath, and for thought, what suddenly struck me was the sheer versatility of these wonderful smoked chillies.

Earlier I had sampled some ‘naked’ (the paste, not me) and was impressed by its depth of flavour, which was earthy, hot, smoky and rich.  The chillies proved a pleasant back-note , serving to elevate the primary ingredients within each dish, with an impressive example being the Feta and Gran Luchito dip – a quick easy option for any dinner party.

Need to know: The food blogger Gastrogeek wanted to make her paste “last as long as humanly possible”. Those facing a similar dilemma will be pleased to know that it can be ordered online directly from www.luchito.co.uk, various independent delis across London, including Bambuni in Nunhead, Mexican restaurant, Casa Morita situated in my local hotspot, Brixton Market Row and now the Amazon website.