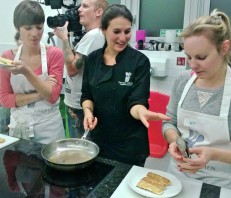 London’s Central Street Cookery School is a popular haunt for Rachel’s Kitchen, which on this occasion was the venue for Rachel Davies’ exemplary Tapas class. On a bitterly cold Thursday evening, such as this, it came as a welcome relief to be ushered into the bright, warm kitchen by her husband. Warmth, brightness, and the familial vibe, prevailed as bonds were formed in no time over nibbles, wine and idle chit-chat.

A quick class prologue revealed this would be a combination of demonstration and hands-on, either in groups of three to four and sometimes individually. We also discovered the genesis for this class was a hen party for which Rachel had been asked to provide a Spanish twist. It proved a roaring success and the Tapas classes, and hen parties, remain a popular fixture in the school’s impressive portfolio.

Rachel’s winning hospitality swiftly became apparent. The wine flowed all evening and there was even a half-time downing of tools to devour something we’d just prepared. This delectable dish of fried goats’ cheese drizzled in orange-blossom honey seriously threatened our appetites, but to wimp out at this stage would have meant missing a marvellous menu of classics such as Tostas de Pimientos, Spicy Beef Albondigas and Crema Catalana.

Much of the emphasis during this class was on preparation, as cooking was relatively simple. The Albondigas, or meatballs, were browned in searing hot pans but then left to bathe in huge pots of simmering tomatoes, so the real task here was chopping shallots and garlic. This meant we all had a go at honing our knife skills; the less squeamish stepped forward to fashion the raw mince into bite-size spheres and we also learned how to make a quick garlic paste simply by using some sea salt and the flat of a blade.

Our Crema Catalana was another case in point. This dish is essentially a Spanish Crème Brulee, which, rather than being baked, is left in the fridge to set, making the preparatory stages crucial. For instance, leaving the combined sugar and egg yolk on standby causes a reaction which begins to cook the egg and this will also scramble if the boiled milk is added to it too quickly.

However, get this right as we did – thanks in no small part to some expert guidance – and it will prove the ideal dinner party pud. It can be prepared quickly, way in advance and finished with the blowtorch right at the table, so providing the ultimate show-stopper. Rachel was sure not to miss this opportunity, even throwing in a useful ‘insider’ tip: don’t waste money on a cook’s blowtorch, a humble builder’s one from the local hardware store will do just fine.

Next up, a salad of orange, red onion and black olive saw our host demonstrating some very precise knife skills through the segmenting of the citrus, which resulted in sleek slithers of fruit that were devoid of any pithy, white membrane. Then it was our turn. Results were mixed, to put it politely, but Rachel softened the blow by reassuring us that she had been given an entire day to perfect this technique on her first day of training at Cordon Bleu.

It’s clear that intrinsic and transferable culinary skills are what Rachel teaches so effectively. She runs a wide variety of classes to suit all tastes, from chocoholic to veggie, but her tuition is no doubt uniformly excellent. It is also gratifyingly accessible, which must be the reason why satisfied students become familiar faces. On this occasion, there were a number of ‘Rachel’s Regulars’ and it struck me that, in light of all the competition in the capital, a loyal fanbase is no small beer.

The first-timers, and those of us ‘flying solo’, managed to feeling wholly included in the conviviality, which was enhanced by Rachel’s clear love and infectious enthusiasm for her craft. In fact, she exclaimed, on more than one occasion, that Tapas was her favourite food, and when we eventually sat down to a dazzling display of devilishly delicious dishes with plenty more wine, I was inclined to echo that sentiment. Further satisfaction was provided by the recognition that dinner was almost entirely our handiwork and with recipes included, something we could recreate at home.

Prior to any formal training, Rachel taught herself to cook and I am certain this is how she inspires students to believe in their ability to simply give it a go. If the success of a cookery school could be measured in how well the message is conveyed that cooking is fun, accessible and rewarding then Rachel’s Kitchen is at the top of its game.