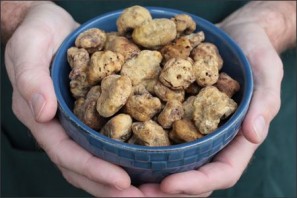 In a way I’d hoped that this had been a fungi cookery course rather than a truffle based one as I was looking forward to using the headline: Mushroom(s) with a View. Sorry.

There are hundreds of cookery courses in Italy and many of them are concentrated in Tuscany (one day we’ll sift through the lot of them and find the best ones for our readers just as soon as we’ve got the UK nailed). In one small village there are apparently three cookery schools competing for business – let’s hope the kitchen knives are well secured there.

The Cookery School at Villa San Michele stands alone, or rather it’s located in a conservatory beneath the five-star hotel, which must have one of the best views over Florence and its Renaissance cityscape from lofty Fiesole.

The morning course is hosted by the executive chef, Attilio di Fabrizio and his sous chef. There are 12 stations, each with a dual hot plate, pans, trays of measured ingredients and a drawer of implements and cutlery.

We covered three dishes – home-made tagliatelle with white truffles, veal sirloin with Marsala and truffle sauce finishing off with the chef’s version of an individual tiramisu, truffle-free naturally. The chef demonstrated each step and we followed close behind him, trying to imitate his technique. It was a good way to work and allowed the chef to circulate and help out where our pasta was overstretched or too dry or where our meringues for the dessert needed whipping up.

The chef (like many chefs really) looked as though he’d be more at home in his work kitchen than in front of a group of English amateur cooks but he managed admirably with the help of translations by his assistant. He even managed to regale us with a tale and sly smile about how tiramisu is a Tuscan dessert descended from none other than Lorenzo di Medici. No doubt the good folks of the Veneto would have something to say about that.

Rolling out your own pasta is always fun and elicits a slew of promises from the group to dig out its own pasta making machines from the back of the kitchen cupboard and make it a regular feature of their lives. The mixture of flour and butter is rolled by hand until it’s elastic then folded and put through the machine changing the grade until you have a fine three-foot strip of pasta like a scarf.

Interestingly, the chef demonstrated how to make spaghetti by using a traditional chittara machine that looked like a medieval instrument and made a slight twang as the rolling pin pushed out the pasta into strips. We stuck to our more functional rolling machines.

It was also interesting to see how much salt is used – 10g in a medium pan of boiling water and the use of a small ladle to add water to the cooked butter and chopped truffles in a pan.  We grated a fresh white truffle from San Miniato on top of the pasta using a truffle grater, this gave it an extra petrol-pungent savouriness.

The veal turned out salty (the combination of salt and a stock cube perhaps proving too much in this case) but was tasty and we ate a mini version of each dish as we made them complete with a glass of prosecco. We then ate bigger versions of the dishes an hour or so later for lunch, where our tiramisu, made with meringues to give it a lighter feel and a splash of the fruity Disaronno liqueur, complete with cocoa stencilled topping was served to us.

For more information: Courses run from April to late October and cost €200 per person. Look out for the seasonal courses such as Discover Mushrooms.