How to make food look good 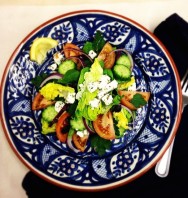 It’s all Greek to me: Ella’s beautifully arranged salad

Being a self-confessed food magazine addict, I have always loved the glorious images of food that make you covet what’s on the page. Whatever the dish or ingredient, food photography has the power to make me crave or reject food. A great photograph will change my dinner plans, and a bad one can put me off the food for weeks.

But what exactly is it that makes a food photograph so successful? A lot, as I have found out.

In the introduction week of The Food Styling course at Leiths School of Food and Wine I was given my first insight into the secrets of commercial food styling when the class – a mix of food bloggers and those just keen to improve their presentation of dinner – was tasked with recreating the image on a ready meal box with the contents of the packet.

My partner and I were given melt-in-the middle chocolate fondants from a well-known supermarket. The image on the packaging depicted a perfectly spherical chocolate fondant with its molten chocolate centre smoothly oozing out. Upon microwaving ours and tipping it out onto a plate as per the instructions, we were left, after breaking it open, with a barely molten centre with half of the sponge still clinging to the plastic carton. Not the idyllic chocolate pudding we were expecting. On second attempt, after some guidance from the food stylist, we undercooked the pudding by half of the suggested time to keep the centre liquid. Then, after choosing the most aesthetically pleasing side (i.e the side without the gaping hole left by the sponge still attached to the plastic carton) we filled in the cracks with some leftover sponge crumbs from the first pudding and painted the inside with more molten chocolate. We were left with a gorgeous looking, but uncooked and inedible dessert, fit for a supermarket shelf.

Other classes on the seven-week course looked at food photography styles, the contents of a stylist’s toolbox and practical, more editorial-friendly styling, with classes on recipes such as trifle, a Victoria sponge and Greek salad.

How difficult could a simple Greek salad be, I thought? Very. The key to styling salads is to avoid the ‘confetti’ style salads you would prepare yourself that comprise a random arrangement of different colours all over the leaves. Instead, stick to colour blocking so as not to confuse the eye. You can also forget the lashings of dressing needed to make the salad palatable. Very little dressing should actually be used; firstly, because it will drown the leaves making them look soggy and old, and secondly because you can’t really see what it is in a photograph. Just little pools of dressing on the plate will do the trick and a very last minute drizzle on the actual salad itself.

No trifling matter styling this dessert

The course culminated in a photo shoot with food photographer Stuart Ovendon and some styling help from food stylist Jennifer Joyce. I, being an unashamed cake fiend, opted to bake my own interpretation of a ‘Persian Love Cake’ with a tripe-layer iced cake for the shoot. We were each given a twenty-minute slot in which we were to create the composition, style our food and get the shot. I opted for a close up, full-length shot of my cake with a slice missing, very carefully placing some extra rose petals around the cake to look ‘accidentally scattered’. The finished shot came out exactly as I has imagined it and is great testament to the skills I learnt throughout the course.

The course, although quite pricey at £495, provided a great insight into food styling, and I learnt tips and tricks that I would never have worked out on my own. However, one downside of the course was that it will do only that, and will not provide the stepping-stone you need to actually become a food stylist. We were assured that to have a career as a food stylist you ultimately need culinary training, something that I have since embarked on.

The Leiths Food Styling Course runs several times a year. There are only twenty or so places on each course so it’s wise to plan ahead.