Foraging at the Fat Hen 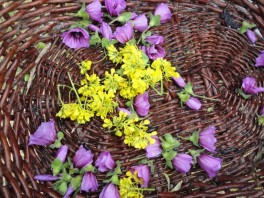 An invitation to a Wild Food Taster Day at the Fat Hen, a cookery and foraging school in Cornwall set up by ecological consultant Caroline Davey, was easy to accept.

The morning started at Fat Hen’s headquarters outside Penzance, where our group of ten sampled Caroline’s homemade sloe vodka. If we felt tired – some of the group had taken the overnight sleeper train from Paddington the night before – then this potent drink bolstered us for the wilds of the Cornish landscape. The Wild Food Taster Days usually last for three to four hours and are rounded off by a 3-course lunchtime feast. This gives plenty of time to work up an appetite.

Our first stop was the hedgerows by the coast. There, despite the occasional shower, we found plenty of plants and edible flowers such as black mustard, nettles and common mallow, which soon filled our baskets to the brim. The common mallow, which has slightly hairy leaves, is probably best eaten cooked (it’s commonly used in the Middle Eastern soup Molukhia), however its beautiful purple flowers can be eaten as they are. Caroline, who led the way, was a fountain of knowledge and dispensed useful tips along our path as we were smelling and tasting the latest findings. She was keen to emphasise that we should only take very common plants and leave the rare species aside. Also, instead of taking the whole plant, we should use scissors and leave half of it to grow back.

After walking for more than an hour over cliffs, through hedgerows and a small village, we had found Alexanders, common mallow, elderflower, rock samphire and sea beet. Later, we also found wild fennel on the beach and wood sorrel in the forest. These finds would form the basis of our lunch later.

In the car back to HQ Caroline transmitted her excitement for nettles and sorrel, and explained how they can be used in soups and salads. At Boscawen-Noon Farm, we gathered in the homely farm kitchen for a quick masterclass with Mark Devonshire on how to cook and prepare wild food. Mark is one of Fat Hen’s five chefs and also a former head tutor at Rick Stein’s Padstow Seafood School. After a chat about ingredients and cooking methods, where Mark cooked and we looked, we sat down to enjoy a very fine lunch.

For starters we had unearthed pork rillettes with pickled rock samphire onsoda bread toast. An interesting pan-fried nettle rotolo with feta cheese and wilted wild greens wasthe star of the show. Monkfish wrapped in Serrano ham, seasoned with wild fennel came up next,and a bread and butter Panettone pudding with elderflower ice cream wrapped it up. The meal tasted twice as good knowing that we’d contributed to sourcing the ingredients.

The day is a great and interactive way of learning what to find in nature’s store cupboard. The strength of the class is that it mixes different elements: walking, picking, talking and eating. I left feeling sure I wouldn’t fall prey to a poisonous plant on my next foraging adventure.

A Wild Food Taster Day costs £75 per person. Find out more about Fat Hen’s other classes here, they run all year long.

This trip was organised by unearthed foods – click on the link to try out some recipes using their products.